REMAINS OF THE ST. MARTIN CHAPEL 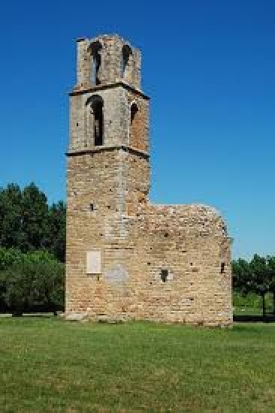 In the middle of a plain north of the village the remains of a Romanesque chapel dedicated to St. Martin sit near a spring and the old washing place that it provided with water.  The building was doubtless splendid but only the semi-circular apse and the square tower of the bell tower to its south are still standing.  This ancient chapel is today a classified historical monument.

One can easily imagine that if, in the 16th century, the owner of land all around St. Victor la Coste and its fortress, Count Rostand de Sabran, had not joined the Count of Toulouse but rather the King of France, this site and the important regional market it hosted, a major point for economic trade and social exchange, would have continued to prosper.  It could have led to significant growth for St. Victor, which would have become an economic and political center. (As punishment, the village lost the privilege of hosting the market that was transferred to nearby Bagnols-sur-Cèze after Rostand’s defeat.)

The oldest known document mentioning the territory of St. Victor la Coste dates from 896.  It was a charter from Louis III, King of Burgundy and Provence, known as Louis the Blind, Through his mother, Louis the Blind was one of the descendants of Charlemagne.  The original parchment has been lost but was copied several times in the 18th century.  In the text, the King restored several domains to the bishop of Uzès that Louis had taken from the bishop during previous wars.  Among the possessions was the Chapel of St. Martin, said to be near a site known as “Mayran”.  The restored valuables included land, vineyards and domestic slaves, both women and men.

The land returned to the bishop probably included an old Roman villa and its supporting fields as exploration at the site has revealed a long period of habitation from the Roman era to the Middle Ages.  In this case “Mayran” seems to refer to the ancient Roman dwelling and farm since the name appears to be derived from a typical Roman name “Marianum”.

The church of St. Martin was on the Roman domain.  It was probably dedicated to St. Martin for two reasons:

It is possible that the church whose remains we can see today replaced an earlier chapel that was already called after the saint.  In this case, it would appear that the returned Roman farm was quite extensive, running from the chapel to the area where the hermitage of Mayran now stands.  Certainly the remains are those of a Romanesque style current in the 11th and 12th centuries and seen in the handsome work of the remaining choir and bell tower.  The site remained in the possession of the Uzès bishopric until the French Revolution but was part of a tumultuous history (see additional information).

In the 13th century St. Victor la Coste belonged to the counts of Sabran and lay in the shadow of their dominant fortress.  The counts owned part of the area lying within the fiefdom of Uzès and dominated the northern part of the diocese, that area known as the Sabranenque.

Due to its natural geographic position, St. Victor was both a military and economic power. On the site where the St. Martin chapel stood, a major regional market was held.  Markets such as this and local fairs represented great commercial wealth at this époque for it was here that almost all goods were exchanged to the benefit of local producers.  The market was also an occasion for itinerant merchants not connected to larger trade guilds or organizations to set up their stands and sell their wares.  The lively markets brought people from all over the region to the village.  It is not known with what regularity the market of St. Martin was held, but one can imagine, given the opulence of the chapel remains, what riches the activity must have generated.

Trouble for – not to say the downfall of– the counts of Sabran began with the Cathar movement from the 12th century onward.  St. Victor through its overlord, Count Rostand de Sabran, was part of the fief of the Count of Toulouse.  This Count, Raymond the 7th, was the leader of one of the Cathar groups and was at war with the French king, Louis the 8th, a son of Philip Augustus and the father of the future king known as St. Louis or Louis 9th.   Having taken up arms along with his direct overlord against the King, Rostand had to seek a royal pardon several times, the first time in 1223.  The King decided to respond sharply in order to show his superior power.  He struck against the key stronghold of the Sabran lands, that is the main center that was St. Victor.  In 1225 he demanded that the St. Martin market in St. Victor’s territory be transferred to Bagnols-sur-Cèze. He did exempt the villagers from having to pay the fees for participating in the new market, a privilege that the village enjoyed for quite some time.

The market transfer led to one of the streets in Bagnols-sur-Cèze being named after St. Victor la Coste.  The street was also popularly known as “The Back Door” or Back Gate Street in memory of the many destroyed fortifications and village gateways that King Louis 8th destroyed.

After a new defeat in 1248, Rostand was even more cruelly punished and forced to accept the destruction of his fortress by Oudard de Villard, one of the King’s officers.