Water problems are not just a contemporary problem.  One finds many accounts in the village archives of the local administrators’ attempts to deal with water scarcity.  On July 23, 1762, minutes of the local council noted, “at the ringing of the hour, the high councilors stated that the lack of water was so severe in the community that one could hardly find water for the basic necessities of the inhabitants and that the animals were suffering too since all of the streams and fountains were dry not having sufficient water levels.” 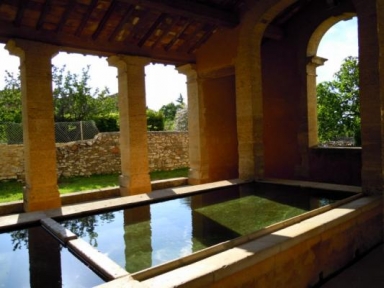 Toward the middle of the 19th century, the penury of water was so bad that the municipality decided to construct a fountain and washing places.  Extracts from local records show the process of making the decision and overseeing the construction:

“During a meeting of the municipal council on December 2, 1843, the mayor read a letter dated November 24 from the sub prefect (an administrative officer of a larger area than the village) that included plans and a report prepared by the architect Mr. Pralong concerning the construction of a fountain.  The estimated cost for the entire project plus the fee for the architect was 586.50 francs.”

Almost two years later, November 9, 1845, the mayor presented the municipal council with plans and an invoice for both the construction of the fountain and a public washing place.  He invited the councilors to study the plans and to vote the money needed for the work “considering that the fountain is of the greatest importance and of public utility.”  He noted further “the population is often obliged in the summer months to walk three kilometers to wash their clothes while the spot chosen for the proposed construction was in the center of the village, that initial digs had been made that showed that a great abundance of water was available for the fountain.”  His plea was heard, and the municipal council unanimously approved the amount of 7566 francs. 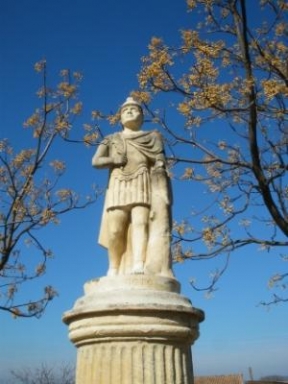 Later minutes show that on August 10, 1847 “presented with an estimate by two chartered surveyors, Mr. Jean-Baptiste Jean from Bagnols-sur-Cèze, and Mr. Gébelin from St. Victor, the municipal council agreed that Mayor Pascal Issoire should acquire the land.  Its price was 350 francs; the owner Paul Bertrand agreed to sell at this price.”

The story continued to unfold as on November 27, 1848, Mr. Gabriel Mathon gave the village the right to establish a subterranean canal running under a piece of land that he owned in the village quarter known as the Puits des Horts (the “Garden Well” where a large communal village garden ran from what is today the town hall down to the washing places; as you stroll down by the pharmacy you will see a reminder of this shared space in the name of the street on your right that leads to the recycling area above the “lavoirs”).  Linked to the village well, the canal was to carry water from a spring to the intended site of the fountain and washing place. The channel was initially to be two meters wide and would end at about 20 meters from the property’s edge.  At that point, the canal narrowed to a single meter.  Running in a straight north-south line, the canal would have a brick base.  The minutes note that “Mr. Mathon averred that the property in question was legally his as he had purchased it along with other items belonging to Mr. d’Alauzier, the last of the village’s overlords.  His purchase had been witnessed by the notary Mr. Morel from Pont St. Esprit on September 20, 1845.”

The construction of the fountain and the two washing places was finished in 1849. The provisionnal budget was 5850 francs.  As a finishing touch a statue representing a Roman soldier was added to the fountain in 1889, but it was later damaged.

Architecture of the Washing Basins 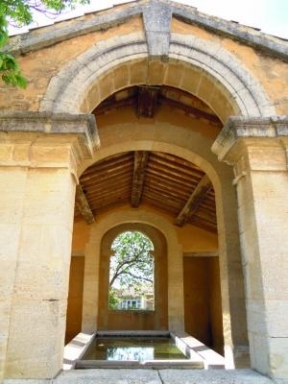 Each of the washing places finally constructed has two separate covered basins.  Standing between them is a fountain fed by a source whose water is channeled into the basins.  The building style is neoclassic with two square stone pillars that form the openings along the sides.  The alcoves on the fronts and the windows were carved by hand from stone thatcame from from the Pont du Gard area.

The light color of the limestone gives greater brightness and the warmth of the Southern sun to the site.

Carved ground-level canals bring the water from the fountain to the basins at a level that permitted flocks of animals to drink.

The two parts of the basins are divided into a section for washing and the second one for rinsing.  The roof sits on the arches in carved stone again from the Pont du Gard area and features a framework of beams and cross beams.  Traditional tiles of baked clay cover the roof, their rectangular form modeled in nearby Fournes.  The final cover is composed of Romanesque tiles that protect the structure.

The large stones enclosing the basins are set at an angle so that women can do their washing.  The ledge prevents soapy water from running into the rinsing basin.

The village restored these structures in 2001, and the damaged statue was replaced and now again overlooks the fountain.