The Fountain of Knowledge

The Fountain of Knowledge

Again the cruel lack of water played a role in creating this village monument.  In 1884 the dearth of water in St. Victor la Coste was so great “the women of the village found it insupportable”, as the grandmothers of today’s villagers told the architect who came to study the problem and to give an estimate of costs.  They added, “Oh, Monsieur, St. Victor is a good village but …. not a place for women!” 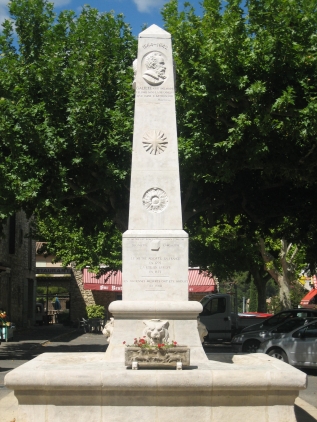 The village needs were clear, and the municipal council decided that enough water for some 1000 persons should be provided.  In 1887, the project for the distribution of water was finalized.  It would include both the fountain in the central square and the twinned washing places in the belief that this plan would meet the community’s needs.

The construction of the fountain seen today in the square in front of the town hall was therefore part of a larger project.  The water flows from a spring in the Pialet valley south  of the village, and the water was then channeled through an underground tunnel dating from the 17th century toward the twinned washing places below the square to the north of the village.  The construction began in 1889 and was inaugurated a year later.

The then mayor, Mr. Léon Bouchet, chose to honor the memory and work of the multi—talented mathematician/scholar Galileo and ordered the firm of architects Dagan and Son to prepare a four-sided stele that would provide basic information of public utility.

A tall stone obelisk made of the clear hard rock from the Lens forest near Nîmes was chosen for the monument that surmounts the basin.  At the top, there had been a weather vane, but it has unfortunately disappeared.  On the four sides; there are two carved medallions representing Galileo and Isaac Newton plus a coat of arms representing the French Republic and the village’s own shield. 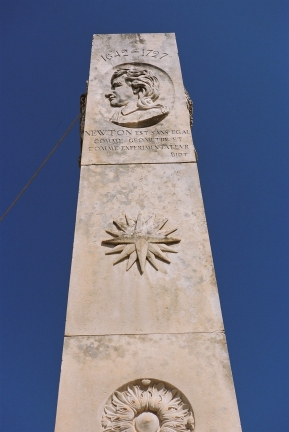 On the eastern face of the obelisk where the Galileo medallion appears is a quote praising the Italian scholar as being “no less famous in the philosophy of mechanism than in astronomy”.  This side also has a representation of a large aneroid barometer such as farmers would have consulted.

An ornament in the shape of a rose decorates the central part.  Then below are some mathematical equations that remind the viewer that the metric system was adopted in France in 1795; it was not until 1840 that older measurements were abolished.

On the southern side, there had been a mercury thermometer that constantly measured the days and seasons but it has not survived.

The northern face is devoted to geography, giving distances to a number of cities.

The western side reminds the viewer of certain measurements in reference to the work of Newton.  The citation from the physicist Jean-Baptiste Biot reads, “Newton had no equal as a geometrician and as an experimenter”.  The face also has carvings of compass roses and rosettes.

Viewing this St. Victorain fountain, one can see where villagers formerly drew both water and knowledge.