The Hermitage of Mayran

The origin of the word “Mayran” is probably Roman, derived from “Marianum”, the name of an ancient domain and formed from the name of the owner “Marius” plus the Latin suffix “anum”.

At the site of Mayran Hermitage, there is an upside down Roman funerary stone dedicated to the God “Manes” located in the right hand pillar and a column decorated with a glass tear that served as a primitive altar.  A niche was carved into the upper part to hold relics.  A flat stone covers the entire part. 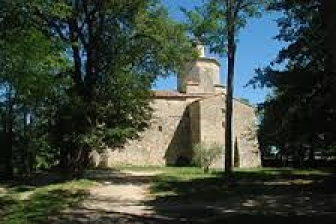 The chapel of Notre Dame or Our Lady of Mayran is in the Romanesque style of architecture.  It is pointed toward the east, symbol of the birth of Christianity to the east of Europe.  The chapel is in the form of a Latin cross with three seating areas, that of the central apse or aisle and the two side areas off the intersection of the two arms of the cross.  These two areas have long narrow windows, and their posts and the archway frame semi-circular alcoves with a good amount of light.  The end of the apse has been sealed in order to enclose the altar space.

The transept is quite developed with an archway divided into four sections that support the bell tower that sits above it rising through the roof.  The bell tower is an octagon with small conical vaulting in each of the four corners of the square tower, a method known as “false semi dome vaults”.

The only decorations on the building itself are the finely-chiseled stones at the top of the tower. 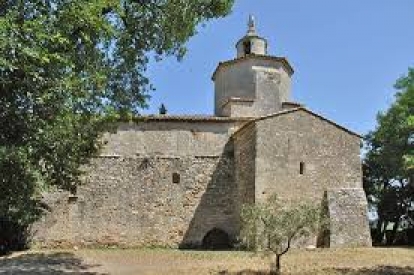 The very simplicity of the building, its unity and harmonious proportions distinguish the monument.  Its tower is unusual as it combines different shapes: a circle, a square, and an octagon all with elegance and solidity.

The chapel has undergone some changes throughout the centuries, notably the nave has been raised, the openings along the top part have been plugged in, and the door on the southern side has been blocked.

An opening to the west was made at the end of the nave.  In 1768, there was a carving of the Virgin Mary and two kneeling monks above this door.  Under the gable a round window permitted more light to enter.

Leon Alegre, a scholar from nearby Bagnols-sur-Ceze, wrote up some notes and did some drawings of the Mayran Chapel between 1845 and 1848.  He observed that the nave was unusual in that it did not have a vault but simply beams and cross beams that were easily seen.  The existing vaulting then must have been added at the end of the 19th century.  The first Romanesque chapels were built without vaulting, so his observation would confirm the ancient origin of the building 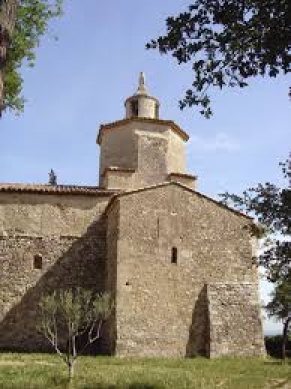 On the northern side of the nave are annexes that were added to the chapel and that give it a rustic appearance.  On the ground floor three rooms are linked to the chapel.  On the first floor, a dormer window opens onto the transept, and a bay window cut into the nave probably served as a rostrum or pulpit.  At the beginning, these rooms were vaulted but their supports have collapsed over the years.
Only a spiral staircase has defied the effects of time.  Since 1978 a voluntary organization has been working to preserve and to restore the Mayran Chapel.

At the beginning of the 18th century, the chapel no longer belonged to the village priesthood as their possessions were taken over and shared out as early as 1722,a legal step overseen by the notaries Galafret and Deleuze.  Mayran was inhabited by hermits who only possessed a few small landholdings.
By 1892 only a single grape vine and a garden were left in the possession of the last remaining resident, “Brother Hermit of Mayran”.  He was a basket maker and was also known as “The Basket Maker”.  He managed to survive with this work and gifts or alms and from this small income to take care of the hermitage.  The memory of the last of the hermits remained for a long time in the village’s collective memory.  He unfortunately met a sad fate, being assassinated in 1915, much to the villagers’ dismay.